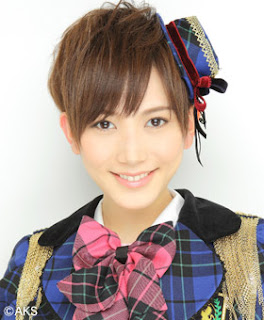 The official blog announced today that Mitsumune Kaoru has submitted her resignation from AKB:

With regards to Mitsumune Kaoru, who has been resting since August due to poor health - we are writing to let the fans know that she has submitted her resignation.

Here are her comments.

I know this is quite sudden, but I would like to quit from AKB48.
I joined last year as a 13th-generation Kenkyuusei, and was promoted to the new Team K during this summer's cabinet shuffle, I think there are surprised people asking why I am quitting.

I have always been a bit weak, and that made it difficult for me to stand in front of you in perfect health.  I feel that if I just leave it like this, it will definitely cause trouble to those around me, and will put more pressure on myself, so I have asked to be let go.
All the staff member cheered me up and told me that it's ok to "slowly nurse myself back to full health", but I feel that maybe it's better if I quit AKB activities altogether.
As of now, all I've been doing is causing trouble to members and the staff because of my poor health, and it makes me really dislike myself.
I came to this conclusion after long discussions with staff members, and in the end they respect my decision to leave.
Now that I have announced this, I would like to apologize to everyone - not limited to fans and those who have supported me, because I have caused trouble equally to other members and staff. Even though I am no longer an AKB member, I would still like to appear before you in one way or another after resting and returning to my best condition.  I would be happy if you would wait patiently.

I've only been here for 10 months, which is not a very long time, but I've experienced many things that can't be taught.
It was very enjoyable to spend time in the company of so many people.
Thank you so much for having me.  We will definitely meet somewhere sometime later.


Just like all the fans, we hope we can meet her again soon.